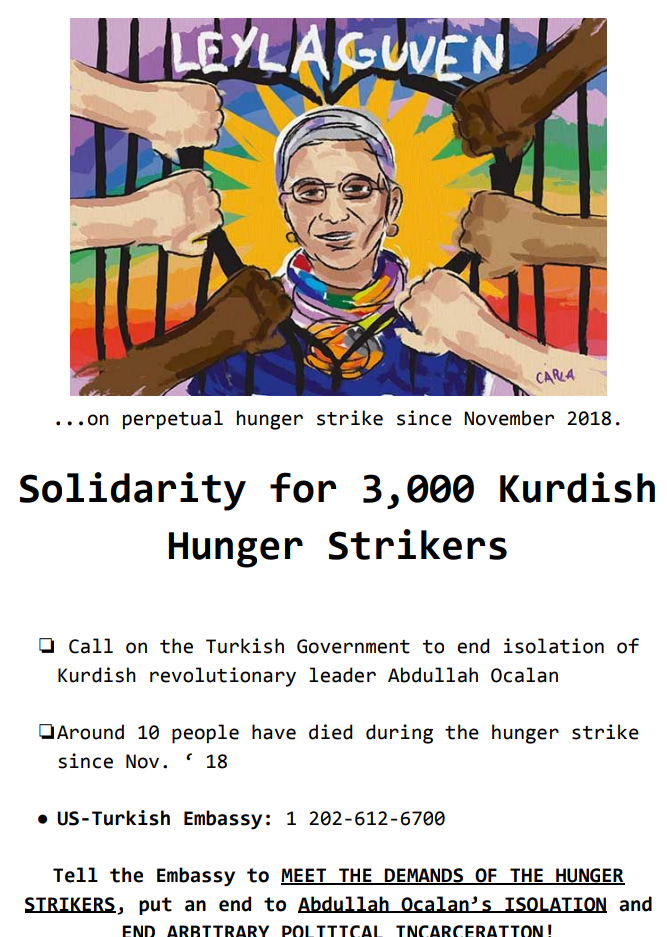 There has been an ask for international solidarity for the 3000 prison hunger strikers fighting towards Kurdish autonomy in so-called Turkey. 15 of them are beginning a death strike (refusing supplements) starting on May 1st.

May Day is international worker’s day, and we know that prisoners make up a major unrecognized part of the global labor force. Middle Eastern prisoners are even further left out of our conversations. It’s up to us to show solidarity across borders- Join us in applying pressure to the Turkish government to hold them accountable.

Contact The US Embassy of the Republic of Turkey

” Hello, I’m calling today to express my concerns about the 3,000 people hunger striking in 90 prisons across Turkey at the moment. Their health and human rights are in danger and the Turkish authorities must give attention to their demands. Justice and democracy are not functioning in Turkey.

Nine MPs from the Peoples’ Democratic Party (HDP), including the party’s former co-presidents, are currently imprisoned. A person with significant political and moral influence to solve the Kurdish problem, Abdullah Öcalan, has been in prison for 20 years and kept in total isolation since 2015. He hasn’t even been allowed to speak with his family or his lawyers in violation with Turkish and International Law. In the last two years, more than 160,000 people have been jailed in Turkey, 700 of which include children. Of the 3,000 hunger strikers, a group of 15 are beginning a “death strike” on May 1st, meaning they will stop accepting any kind of vitamin supplements or nutrients.

The Turkish Government must answer the demands of the hunger strikers by ending Abdullah Ocalan’s isolation and ending mass arbitrary political incarceration. We will continue following up until the demands are met ”

More background on the issue:

Find a list of Turkish consulates in the US here: http://www.bu.edu/abroad/files/2014/07/Turkish-Consulates-list.pdf